Time to get one of the most critical (from an aesthetics perspective) parts of the build done.

Having spent numerous days researching options for the dials I narrowed it down to:

I ended up plumping for the classic instruments six gauge set with the 5″tacho and speedo – nice and simple and big and easy to read.

I’m not too sure if the bezels are IVA compliant at the moment, but I’ve seen other people get over this issue with a trimmed panel temporarily fixed to the dash to reduce the amount they stand proud of the dash.

To get them nice and central I did the following:

So, the wiring and sender installation was not as simple as it should have been, and here’s why…

The fuel sender is a simple beast to fit… or so I thought. Initial setup of the sender is easy, just follow the instructions to get the correct arm length and wiring up is also a doddle with one signal connector on top and an earth on the flange plate. However, unfortunately my AK fuel tank was pre-drilled with 6 holes on 60mm PCD but my fuel sender flange had 5 holes on 54mm PCD. Great.

Having contacted several machinists and received quotes from £60-£100 for a new plate I decided to do it myself and with the help of a mate with a lathe, I machined a new flange plate from an aluminium plate from eBay. All done for £7.

5 holes too close to the opening to re-drill

Pretty simple, just screw it in the port on the drivers side, rear port on the side of the block near the cylinder heads (see picture). Only the sender that came with the guages wasn’t the correct one for an LS3. Having contacted eGauges who i purchased the gauge set from, they were great and sent me a new one immediately FOC.

A simple one, connect the signal cable from the Omex RPM output to the gauge input and change the dip switches on the back of the gauge to XXXXXXXX.

This one caused much cause for debate. The gauge set comes with a signal generator (SN16) that is compatible with the gauge, but cannot be directly connected to the mechanical port on the TKO-600 (or 500 for that matter). Classic Instruments do make an adapter (SN17) that you can use to allow this to be fitted to a T5 gearbox (I believe this is also compatible with the TKO transmissions) but this will also need a small plastic toothed gear. You then need to calculate the number of teeth using this formula:

Putting it all together with a retainer clip should provide you with a speed reading that can be fine-tuned via the dip-switches on the back of the gauge.

There was also a second option as the TKO transmissions come with a built in electronic speed sensor, but it generates pulses at 8000 pulses per ??? and the gauge works at 32000 pulses per mile. Being an electrical engineer, I was far more comfortable with using the built-in electronic sender than trying different numbers of teeth on plastic gears etc to get an accurate speed. So I plumped for the Classic Instruments signal converter SN74Z, a little box of tricks that converts any pulsed input into a compatible output and is dead easy to calibrate by the touch of a button.

This meant I needed to plug the mechanical speedo port in the transmission as the crate transmission comes with a black rubber bung that isn’t suitable for road use. So I found a package on eBay that consisted of a metal cap for the speedo port, a reverse light switch plug and VSS pig tail (connector for the built-in electronic speed sensor). Unfortunately TKO use different connectors for the VSS now and the pigtail that came was the wrong one:

Back on eBay and I found the right one: 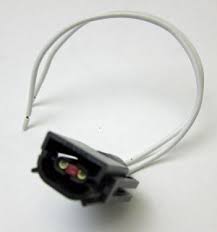 The speedo plug requires a ¼” -20tpi (UNC) x 12 coarse thread bolt to fix it to the transmission (eBay is your friend!).

The oil pressure sender is quite a big beast that has a 1/8NPT thread. The oil pressure port on the top and the back of the block (next to the vacuum port) has a M16 thread. Following advice on the forum I used a T-piece like this with a dowty washer on base between it and the block. No need for a washer between the sender and T-piece as the thread is tapered on the sender. One thing I’m not too happy with is the fit of the T-piece to the block. The advice is to put a few washers on until you can tighten it up and have the output port on the side pointing in the correct direction. Unfortunately it seems all the washers I have were the exact same thickness as the thread pitch and no matter how many I put on, the port always finished in the same spot! I tried several other washers from eBay that put the port facing directly into the manifold and one that didn’t leave enough thread to get the thing onto the block. Either way, the signal dowty washer with the T-piece done up as tightly as I can manage doesn’t appear to be leaking at all. One to keep an eye on though.

The first attempt at dash wiring was successful, but it always left me wondering when the first connection was going to drop-off… not a good feeling. This was mainly due to the way the cables were piggy-backed from one terminal to another and the crimp terminals did not like having two cables within it. I’ve since been through and tidied it up a little, but I’m still not 100% happy, but with my wedding day looming my priorities are elsewhere!

After some deliberation I decided to install a head unit in the dash.